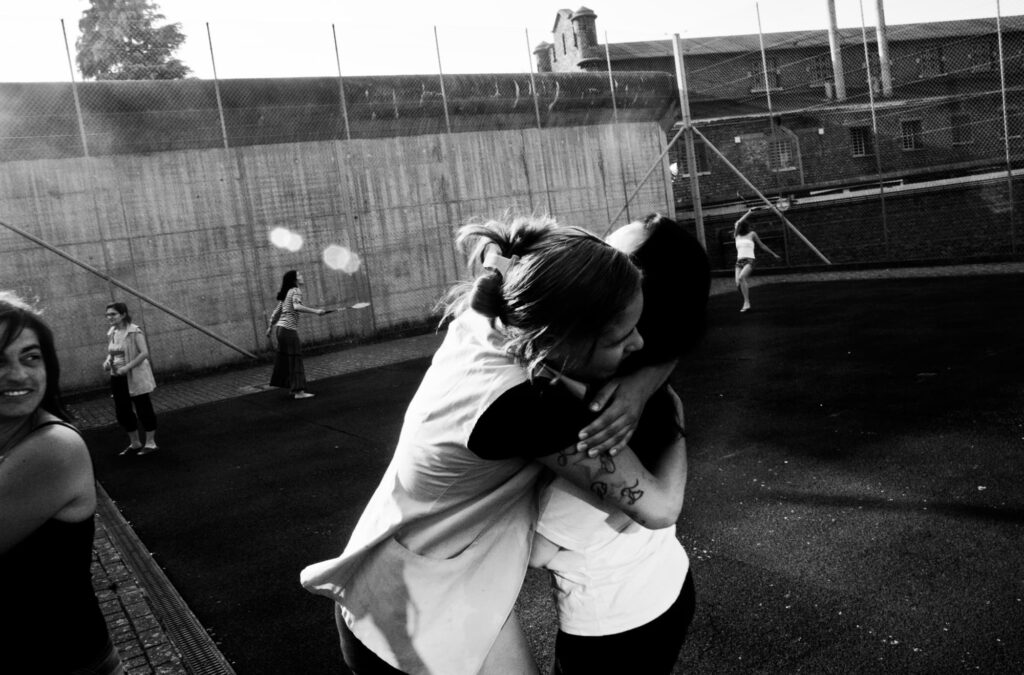 I have already talked about how sometimes I look at an image but instead of the photo, I see a wider shot of the photographer with the camera glued to his or her eyes, index finger on the shutter release. Sébastien’s photos evoke this immediacy, urgency and fragileness. A split second too soon or too late and the image is gone. I look at them and it’s like watching the finish of a great race, the runner about the beat his personal best: there’s a flash of anxiety (‘Oh, no, he’s gonna miss it!’) followed by sharp relief – ‘He did it!’ 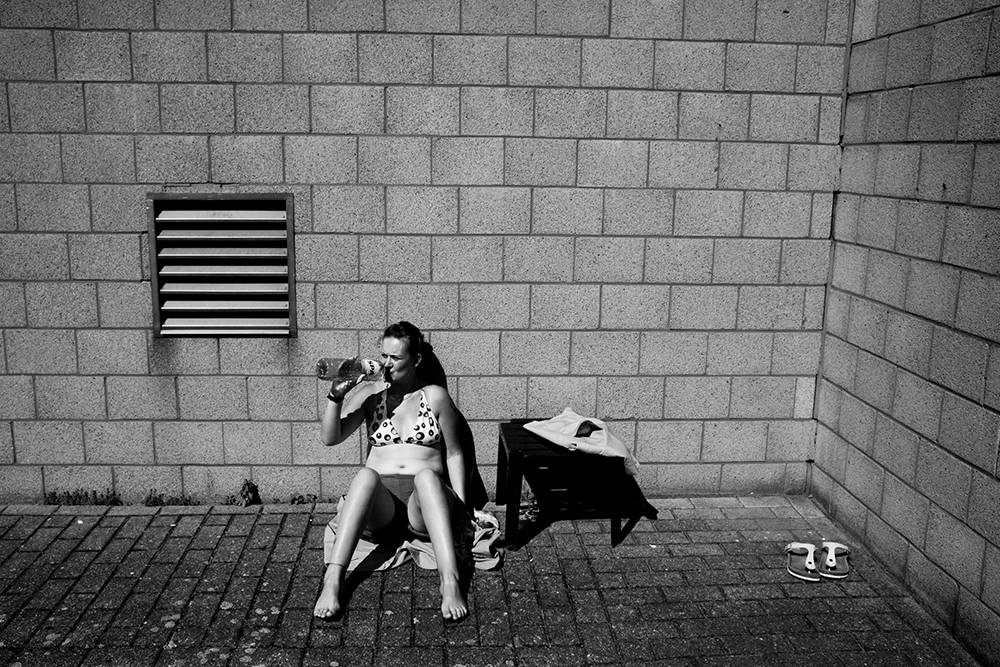 SVM: This is a personal reportage that I’ve been doing since 2011. I wanted to continue my project about justice, and the prisons are the second part of it. I went and visited several prisons to understand and to show the daily life of the inmates inside the walls of the penitentiaries. This photo was shot in a prison for women in Brussels, it was in the summer and I was surprised to see women playing and enjoying life inside this ‘place’. It was really hot and some of them were even sunbathing. For me this picture shows that these people in the prison are not merely criminals, they are also humans with emotions. No matter what they did in the past, it simply shows how they struggle to keep going.

GL: What about the first part of your reportage?

SVM: I’ve always been interested in violence and I wanted to talk about what it’s like in my country. There’s no direct link between this subject and my personal life, but yes, I have a certain fascination for the unseen, for crime stories. I’d like to understand what can make people commit crimes.

GL: How did those young people react to you? You mention that it was a kind of time travel for you. Do you think that – although they may not have consciously realised this – your “antique” equipment, your 6×7 camera and your studio flashlight meant a similar kind of magical time travel for them?

So the series about the police was an interesting opportunity. I wanted to show something different from what the TV shows and all the magazines do – talking all the time about the police using the same clichés: arrests, bulletproof vests, car chases…

I wanted to show reality, no concessions, just speaking the truth. After a while my interest in the police evolved and I was increasingly fascinated by the relationship between the police and citizens. I have spent years with the police, taking pictures of them as they work, trying to understand them, photographing their daily scenes that are never seen. I was shooting pictures of emergencies, of the impact of crisis on people. I think the justice system is like an old administrative system: completely out of date and not aware of the needs of the country. And I wanted to show that, as well. 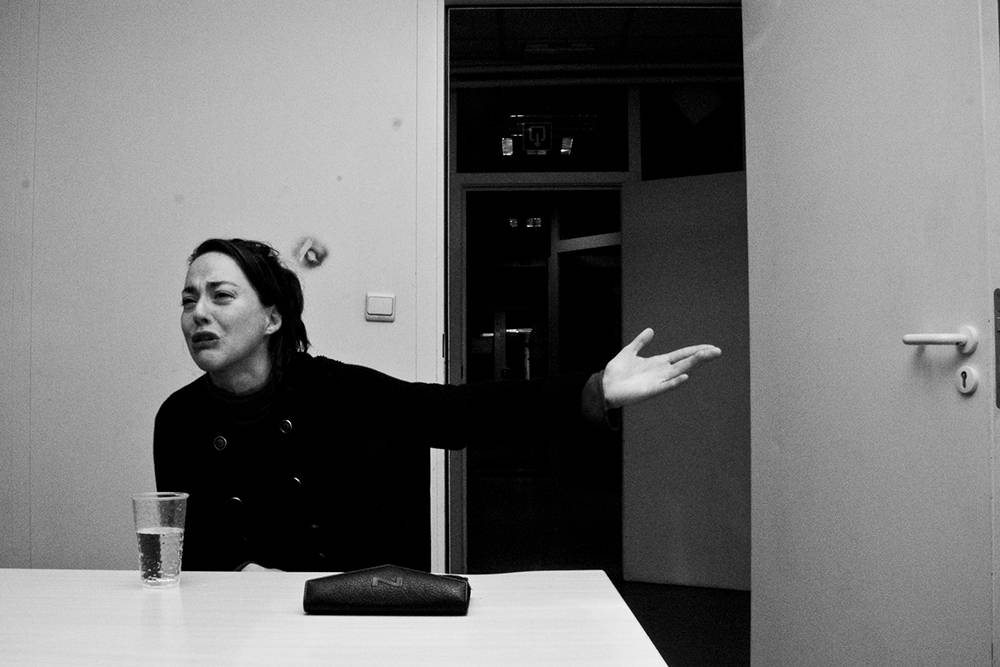 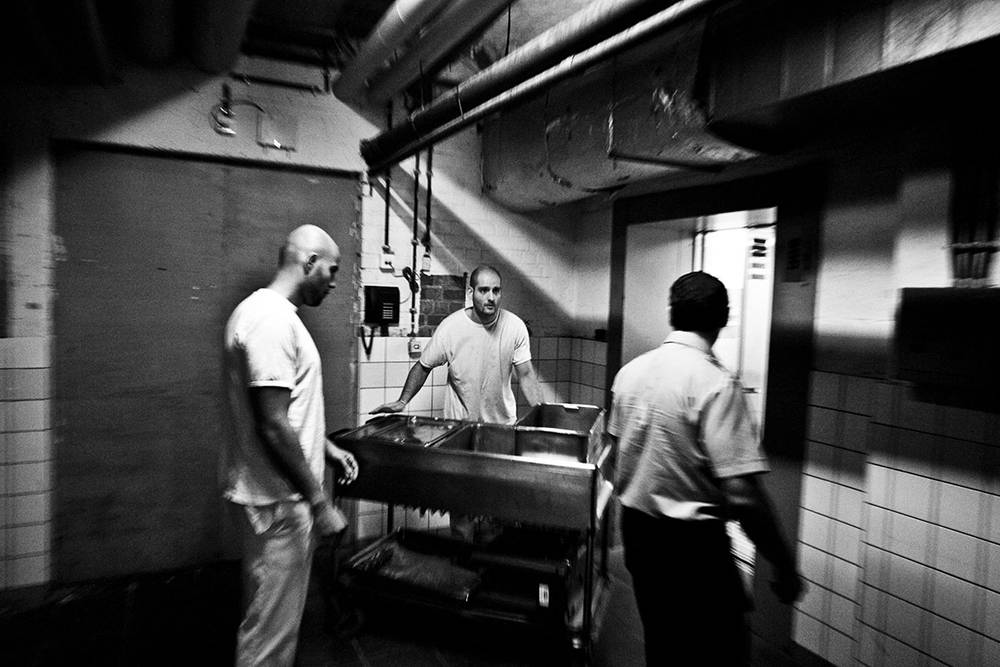 So after the police, the next part was obviously the prisons… What happened to the people who got arrested ? Where do they go? What is the daily life inside the walls that the justice system had created like?

GL: What caught your attention when you saw these women play badminton?

SVM: I just saw the scene and I felt touched. So I took the picture. I don’t usually ‘think’ when I’m taking pictures, I act more on instinct.

GL: What do you think about this instinct? Is this something you were born with or is it a question of experience and training?

SVM: I’m a kind of nervous person, and my job is a passion. I’m totally involved in it so… I suppose that taking pictures with instinct is related to this passion, to this feeling.

GL: Looking at your pictures I have to feeling that you are always ready to take a picture.

SVM: I focus mentally when I leave home and I focus my camera when I aim it. But the only things that really matter are people. What they show, what they feel, the moment, the energy and obviously, the light.

GL: What camera do you use?

SVM: The first camera that I bought was a Canon 5D Mark I in 2008, it was a second-hand camera. I bought it because it is full frame and it wasn’t too expensive. I learned to shoot with it, and I began to get used to it. Ever since then, that camera has never left my hands, and I’m able to use it without ‘thinking’. 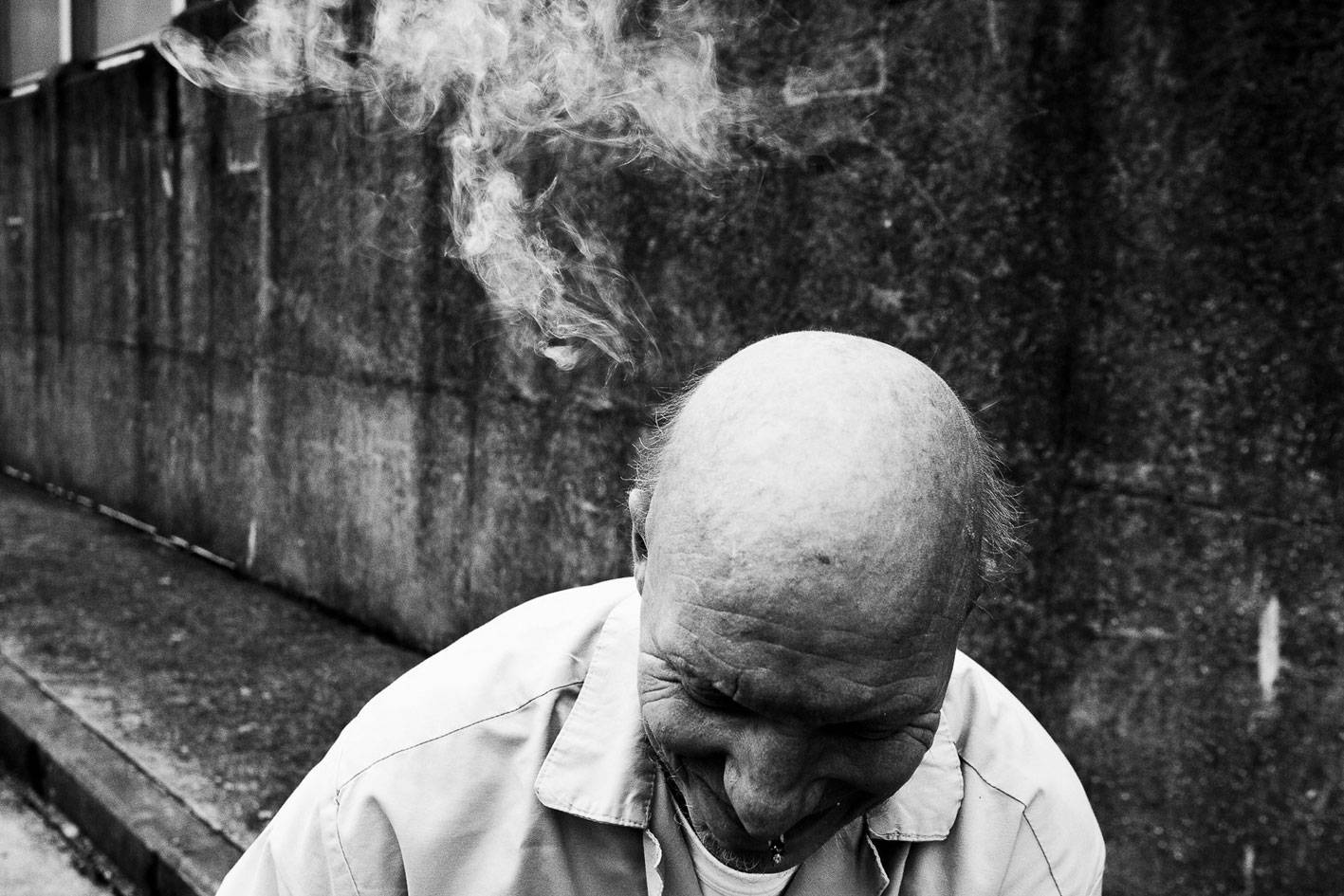 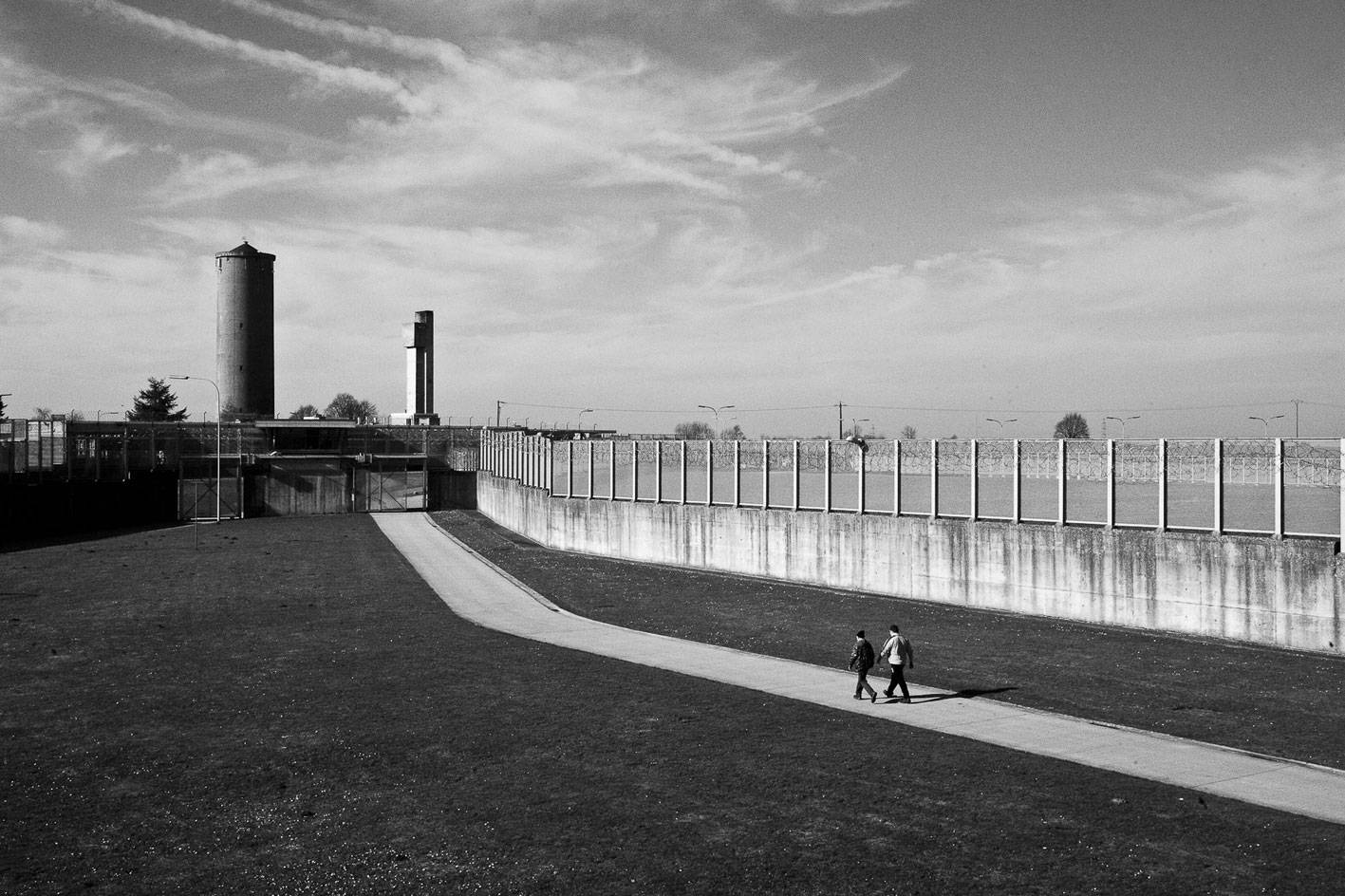 GL: So you haven’t upgraded to the Mark II or III? Why? Is it emotional attachment to your camera or is there something about the Mark I that you especially like? Do you have a favorite lens?

SVM: I also have a 5D Mark II, but I don’t like the way how your pictures are intensified with these new cameras. Colors and black-and-white look like advertising pics. I have no favorite lens, I use what I need. Maybe a crush on the Canon 28mm f/2.8 – the sharpness is really good.

GL: What was the original picture format? And what about your settings?

SVM: I shoot in manual mode and sometimes I crop my images. But I don’t think it’s too interesting to talk about shutter speed and settings. Because I’m on fully manual, my settings change all the time as the light changes. Sometimes I underexpose my pictures to get more blacks.

GL: How do you focus?

SVM: Mostly auto-focus but sometimes in the dark the AF doesn’t work too well, so I switch to manual.

GL: What’s your relationship to daylight and artificial light? How do you feel about flash photography?

SVM: I love shooting with a flash when it’s necessary, I like to put a light where there is none, to force people to see… It’s different inside the prison because I can’t stay there at night, so I don’t need a flash, there is enough light. And I don’t want to use it like an effect. The flash can be useful but must used with clear intentions.

GL: How do you think the flash influences your pictures? It calls attention to you, people react to you, you become a part of the situation.

SVM: First of all, flash photography has existed for a long time and flashes are part of people’s everyday notions about photography. So they aren’t too surprised by them, especially at night when it’s normal to use a flash. Yes, many photographers are obvious, but it’s not your camera that makes you visible, it’s your behavior. Whether it is a flash on a reflex camera or just a smartphone. If you just act slowly, respectfully and discreetly, people don’t pay attention. Yes, sometimes people react, but I’m used to talking to people, so that’s okay. 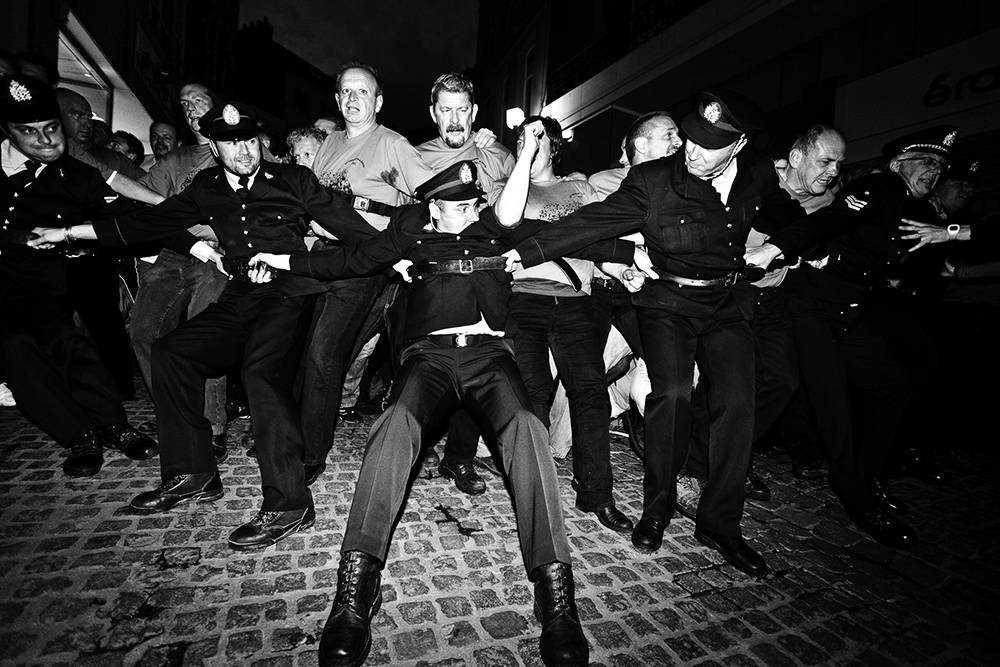 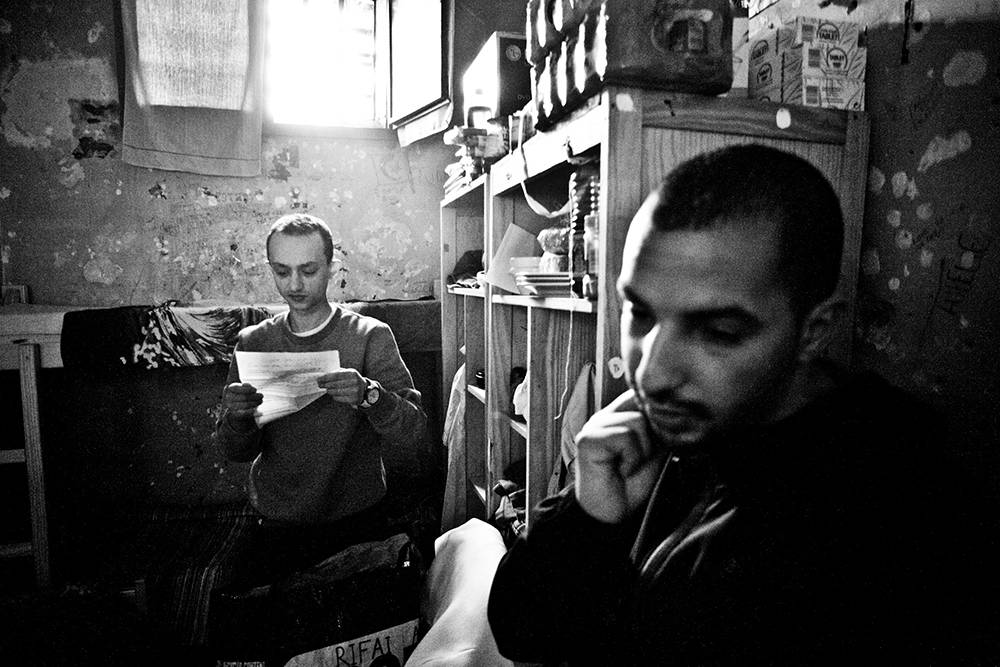 GL: How much do you work with your images in post?

SVM: I’m not the best in post. I don’t like to use all these new ‘tools’ coming all the time with Adobe Photoshop CS and all these programs. So, I work like I would in a lab with paper and filters: I adjust the contrast, the exposure, and I fix my blacks.

GL: I am also ‘conservative’ with my digital black-and-white pictures – but I often tweak the luminance of individual color channels. Do you do it to get the most out of your images?

SVM: Not at all. I can’t change the color channels because I’m color-blind ! I turn all my rushes directly into black-and-white in Adobe Bridge, using the original black-and-white settings from my camera. I don’t like to see my pictures in color. I think mainly in black-and-white.

GL: Do you shoot on film?

SVM: I mainly shoot digital, although if I love film. Sometimes, when I want to work slower I shoot with a medium format camera and an old Canon EOS-1.

GL: How do you choose your distance from your subjects? When do you go close and when do you stand back and just observe?

SVM: Like any human, I observe, I feel. If I can go closer I will and then I’ll shoot really close.

GL: How do you see your relationship to your subjects in the police/prison pictures? How do you build acceptance or trust?

SVM: My relationships were different for the police and the prison series. Because the project lasted so long, I was accepted into the ‘family’ by the police. And also because the cops were close to my age, so we had a lot in common. For the prison series it was different. Prison is an administration, and I can’t stay as much as I want to, where I want to. I think if you want to be accepted somewhere, just be honest, explain what you do, why you do it, be sincere and then the people who you meet will trust you, and they will feel comfortable with what you do. 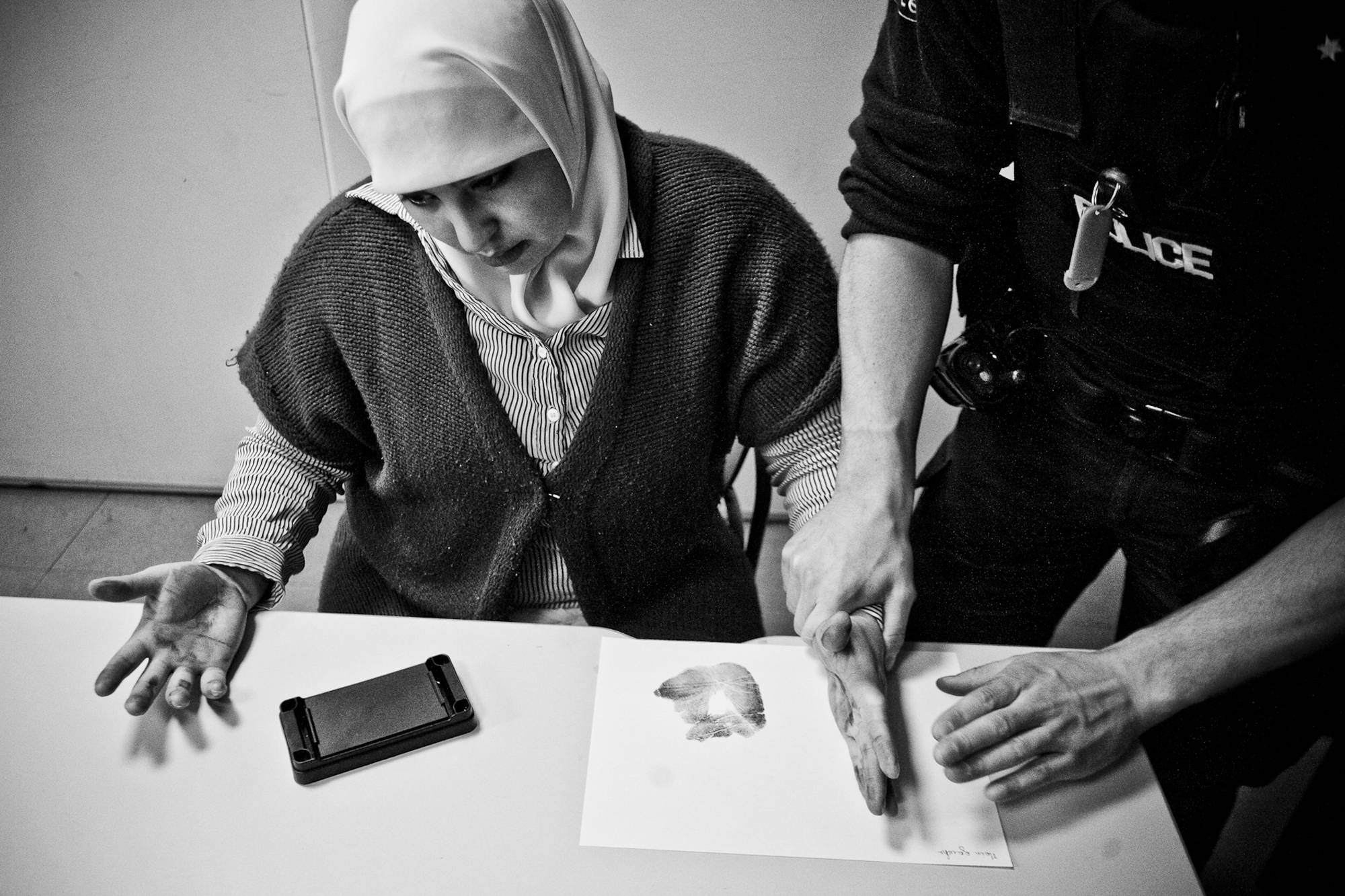 GL: What about your latest images, the North Road pictures? Looking at them they are obviously a lot calmer than the police/prison pictures (the topic is different) but I somehow sense that you are just as intense and alert when you observe nature, weather and ‘ordinary’ people.

SVM: I went on a road trip with a friend in Norway in August 2013. We were invited as artists in residence for one month, to do something new.

When we first drove into the North of Denmark, I was shocked by the intensity of the light. Then the interaction of the road, and nature, how people live in the north. I took pictures of these, simple as it was. I tought a lot during this trip and I noticed that I liked that a lot. So afterwards I decided to continue the trip in Iceland. You can take pictures of violence for a long time but sometimes you just need to find a way to breathe, it’s a part of the balance. 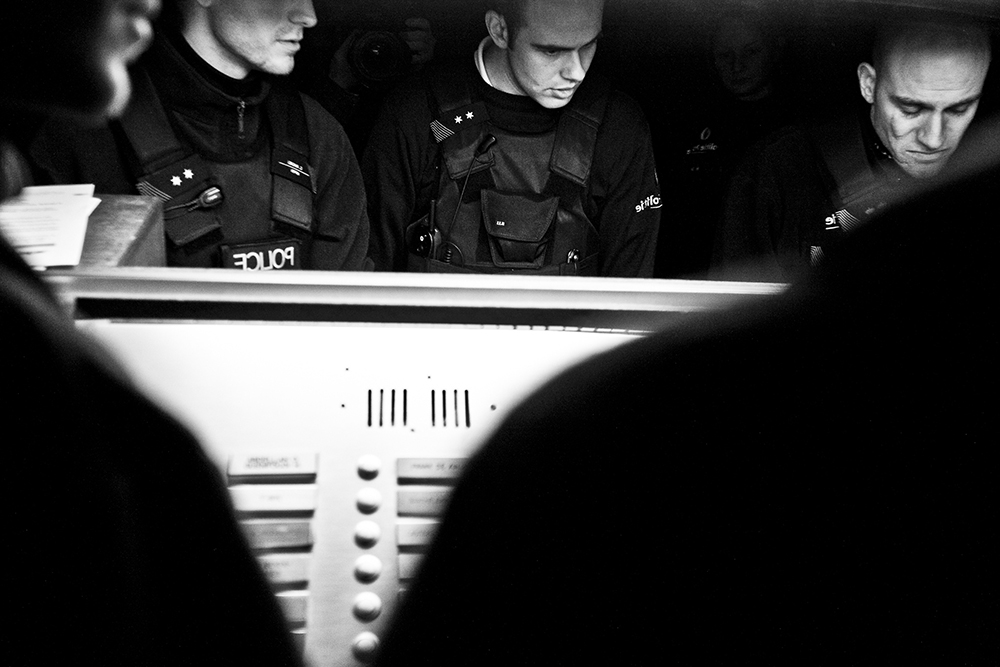 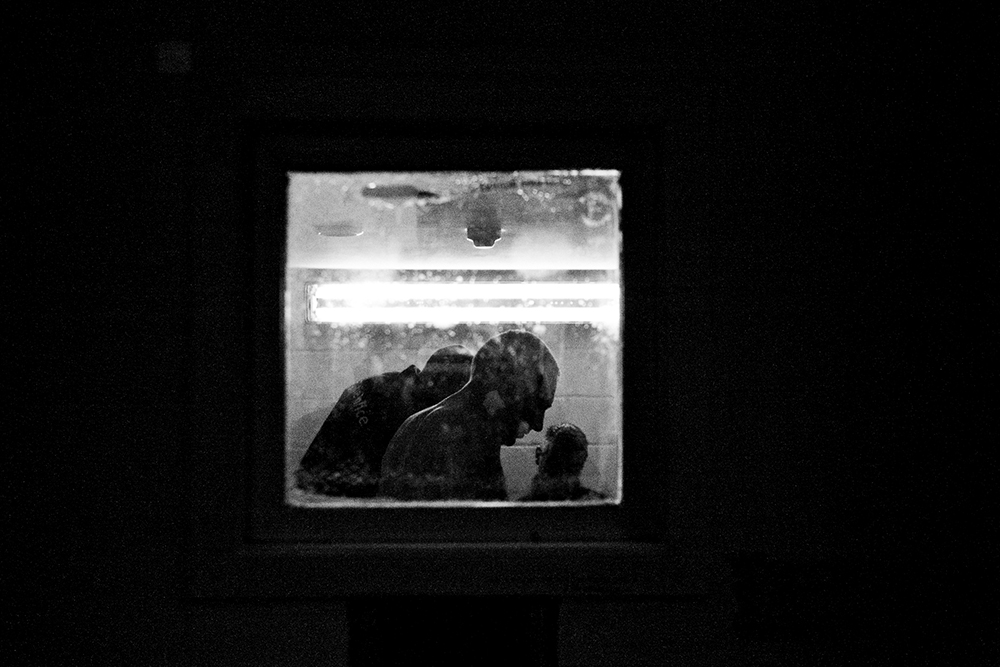 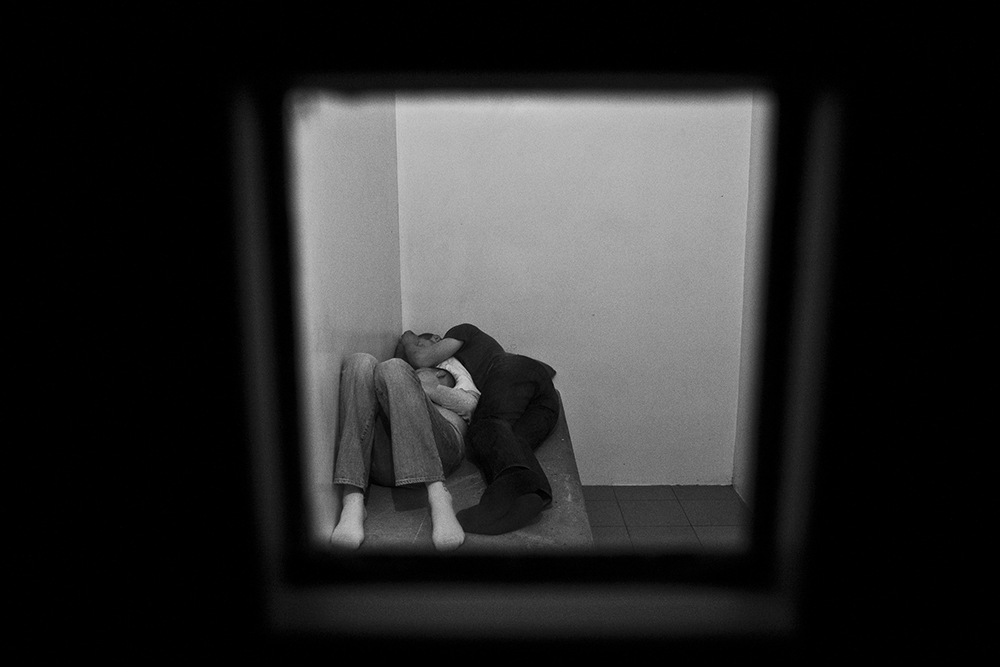 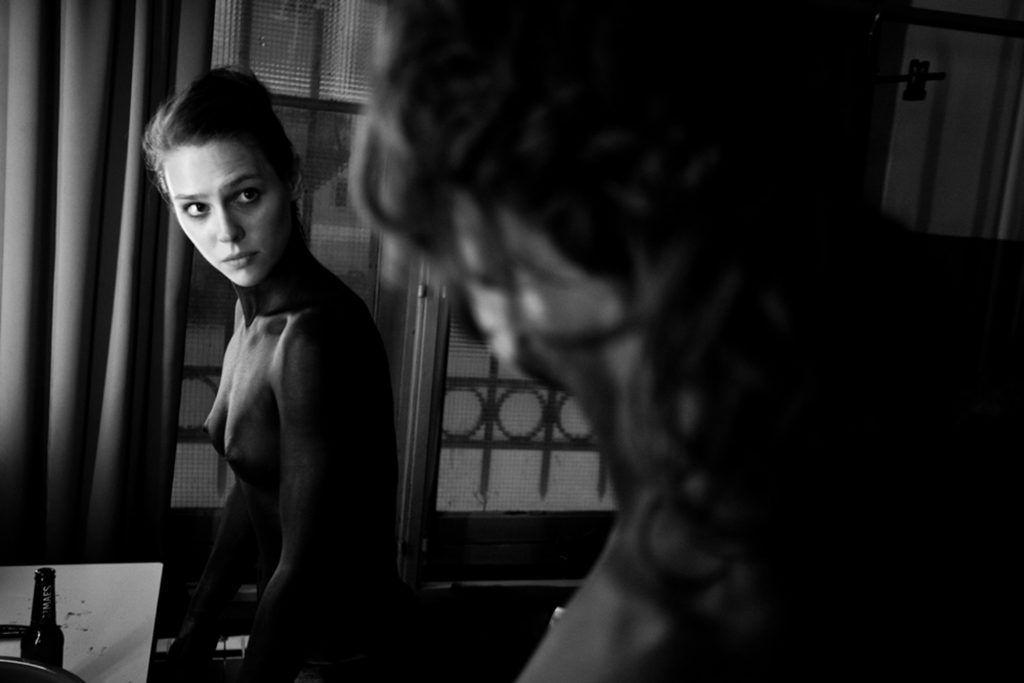 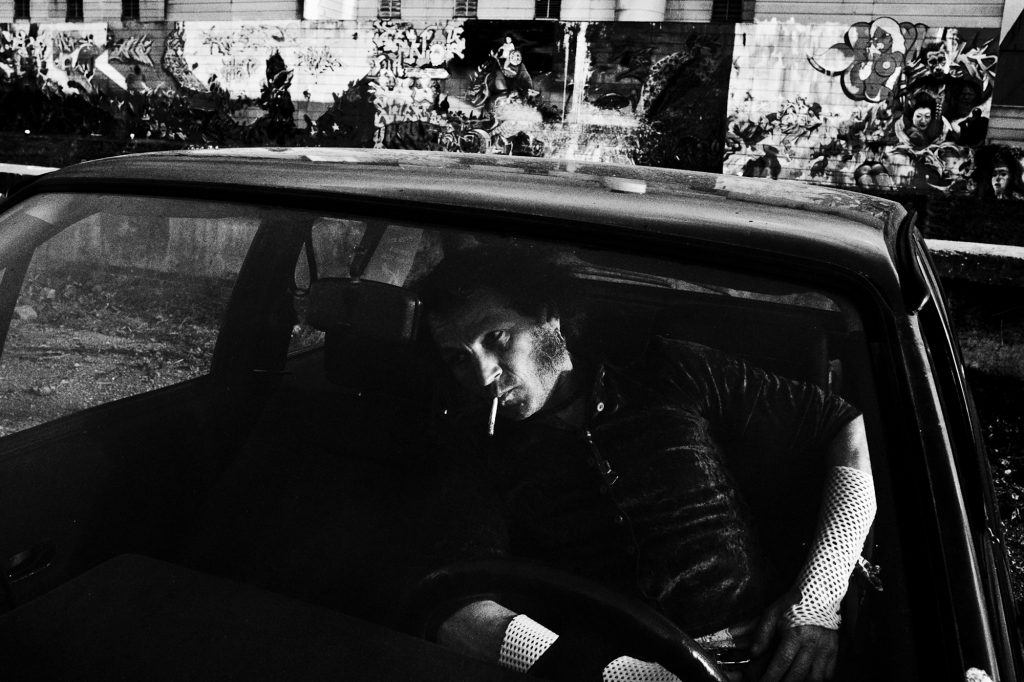 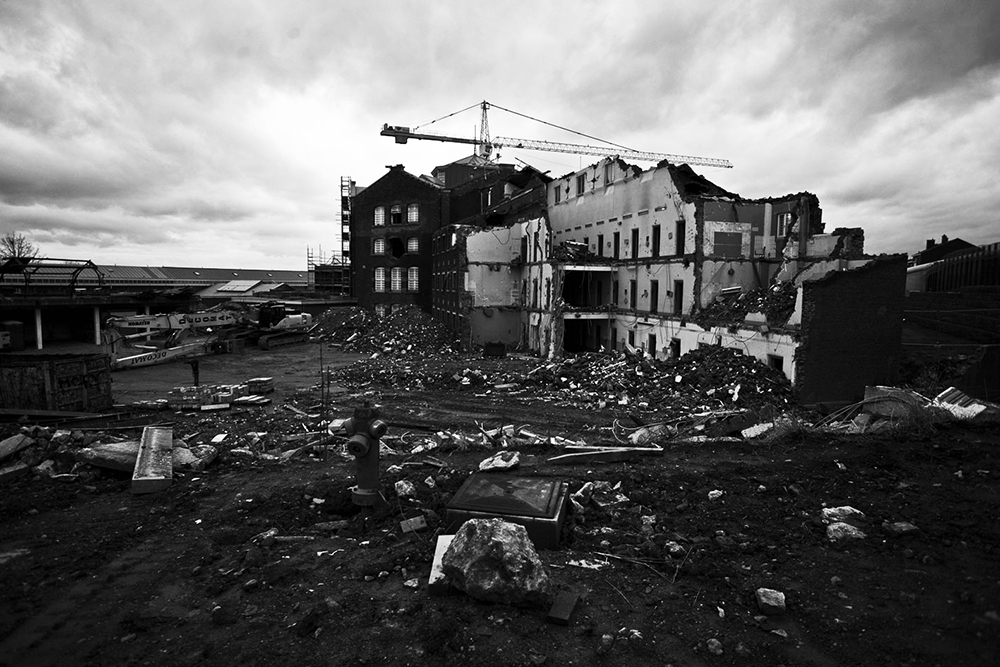 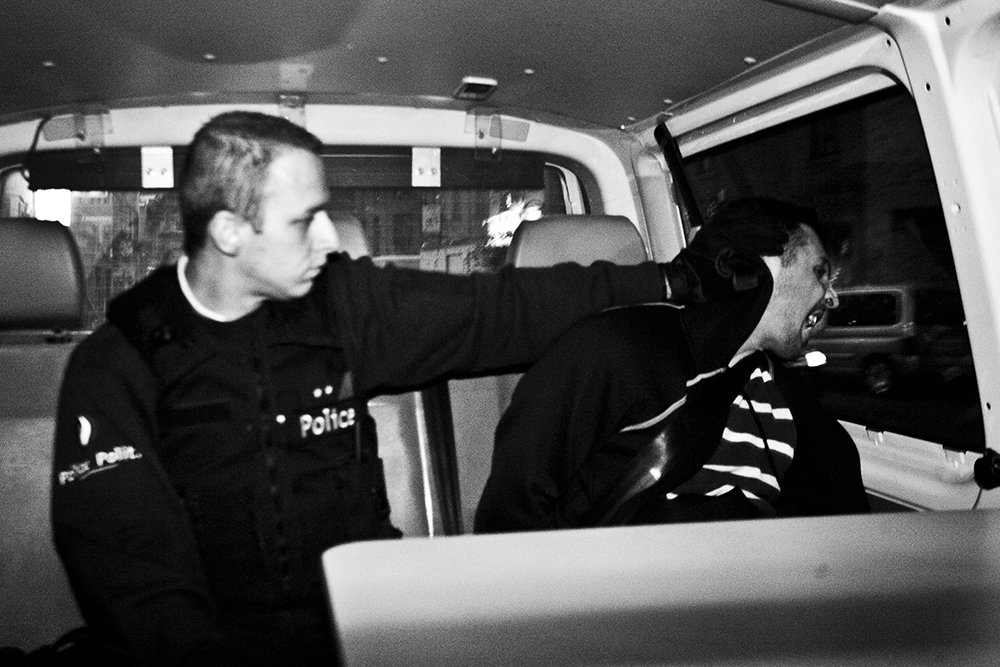 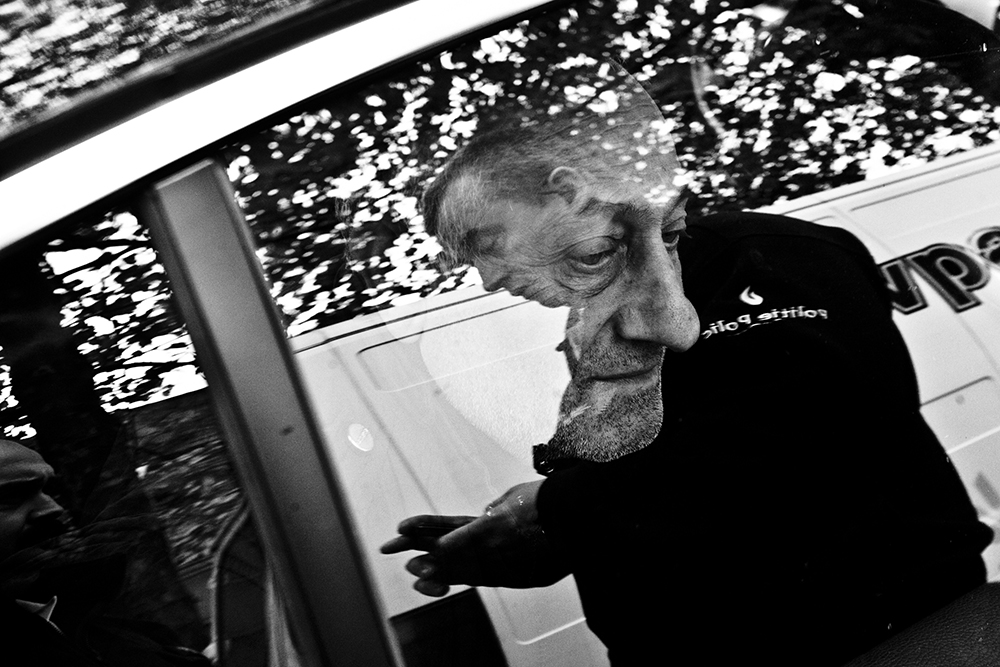 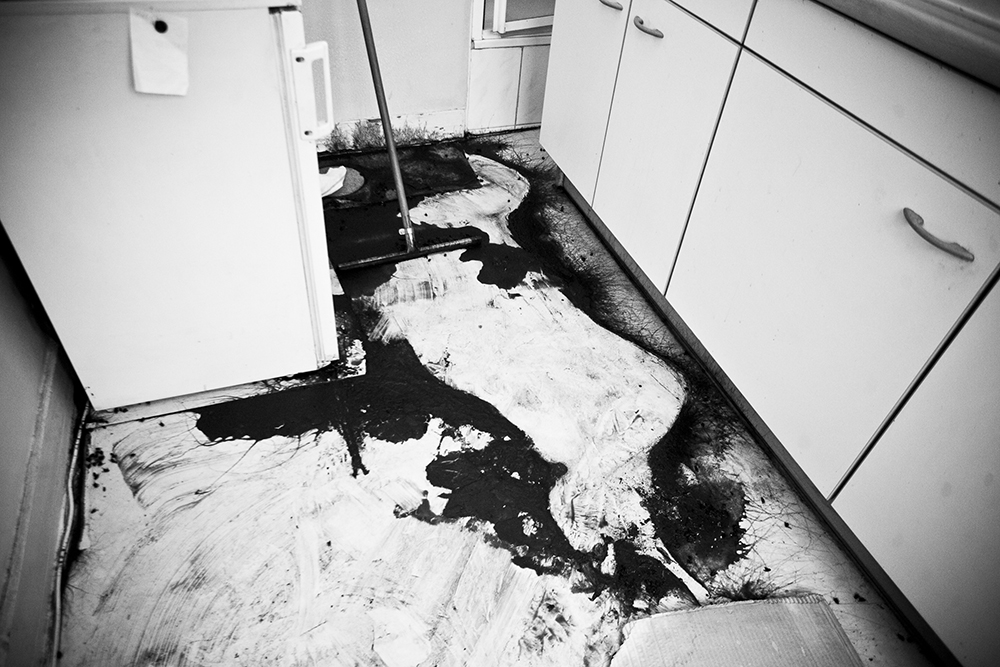