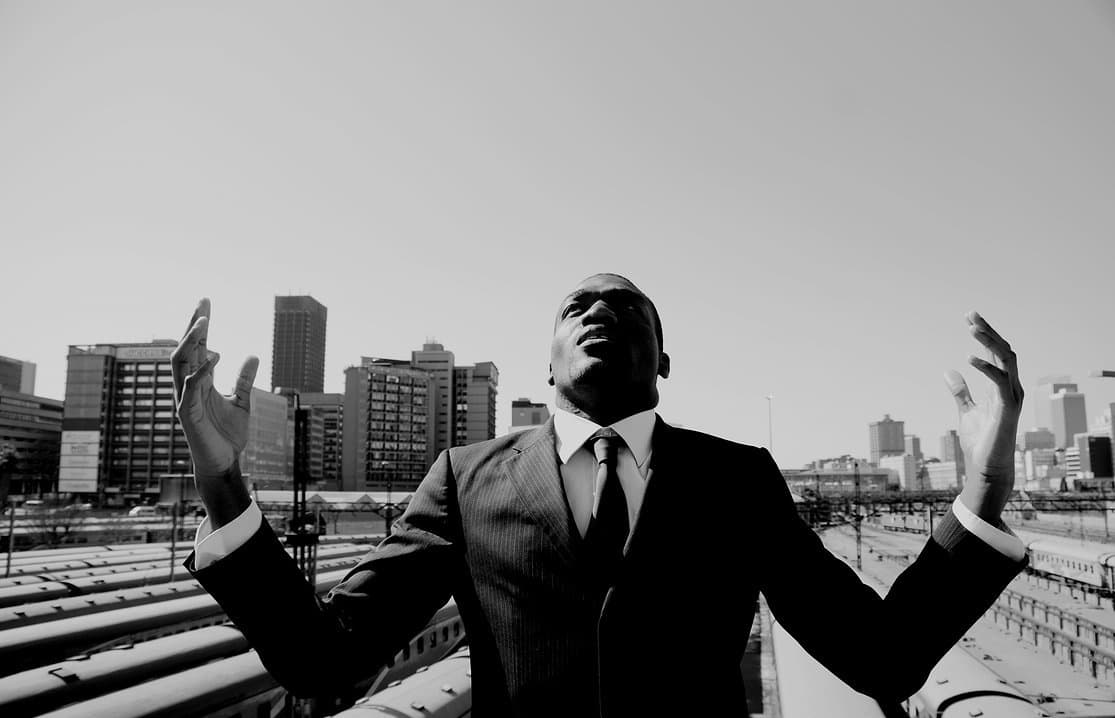 GL: When I first saw the picture of the Man on the Bridge, I thought he was a preacher calling to God. And there was some intangible contradiction between his formal gesture and the informal urban setting that I found very exciting.

YM: While the majority of my photographs are unchoreographed, this was part of a conceptualised shoot. The photograph was taken on the Nelson Mandela bridge in Johannesburg at 9 o’clock on a winter’s morning. I wanted to connect with the post-apartheid spirit of South Africa. The man (a friend of my sister’s) is a business analyst who holds dual citizenship of Nigeria and South Africa. I was interested in exploring the dichotomy of being a successful foreign black man in South Africa.

GL: How did you come up with the shot? Was it all prompted by the location? Or was the primary force his body posture?

YM: The location and posture were incidental. I wanted a city landscape as a backdrop, we happened to pass the bridge and I was immediately drawn to it. Initially he was just walking along the bridge and then as the shoot progressed that barrier between subject and photographer disappeared and he was no longer playing a part but just being. For me photography is more about feeling than thought. Words that come to mind are intuition, premonition, magic. I see photography as a form of metaphysical alchemy. 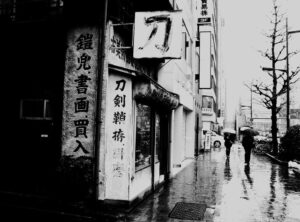 I have always been drawn to photography. I got my first film SLR when I was 21, but at the time I couldn’t afford the cost of film and developing. The camera ended up gathering dust and I eventually sold it. When I moved to Hong Kong in 2006 I started taking photographs with my mobile phone camera. I took photos of anything, whatever caught my eye. I was smitten. I bought a Canon G7, then upgraded to a Nikon D7000 and now I have a Nikon D800. Photography has become a way to express my personal thoughts and feelings and I find that it is a lot less incriminating than words. It also speaks to anyone anywhere in the world as it transcends the constraints of language, it is in itself a universal language.

GL: What equipment did you use for this picture?

GL: How much do you usually work with in ‘post’ with your stills? 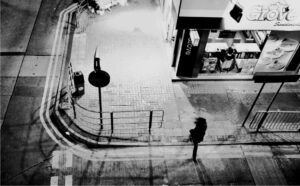 YM: It definitely depends on the shot. With this picture the ‘post’ was limited to a black and white conversion and some minor adjustments in the brightness, contrast and midtones. As I find post-production rather tedious and I would not entrust it to anyone else, it has definitely motivated me to become a better photographer in the sense that I try to minimise the need for post-processing.

GL: Most of the images on your website are black and white. What draws you to it? 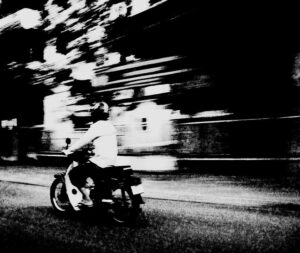 GL: Do you ever work on film?

YM: I don’t work on film, but if I was not faced with time, space and financial constraints I would absolutely love to. I have succumbed to the instant gratification of digital photography.

GL: I noticed that in your street photography you are usually quite far from your subjects. You observe from a distance. 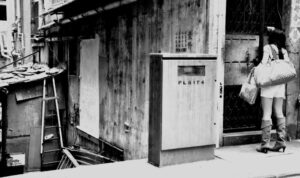 YM: I am an introvert by nature, so I am acutely aware of personal space. When I shoot portraits there is certain level of familiarity and intimacy. The subject is obviously aware of me and my camera, the subject has to let me in, connect with me. For a few hours we become emotionally involved and I am allowed to enter his or her personal space, I can get up close and personal with my subject. But with street photography I am just a passive observer, I don’t want my presence known. I don’t want to alter the course of events, I don’t want to influence anything. I am just an outsider looking in, leaving my subject unaffected, untouched. Distance definitely makes this easier. I guess there is a certain amount of voyeurism attached to my street photography.

GL: What do you like about the Man on the Bridge the most?

YM: I like the lines and his expression, to me we stopped the time-space continuum at exactly the right moment. I take pictures because I want to. The feeling of capturing a moment that will never be repeated again is unlike anything I have ever experienced. 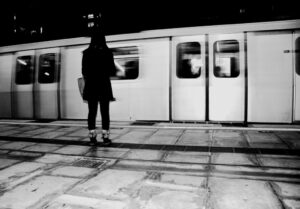