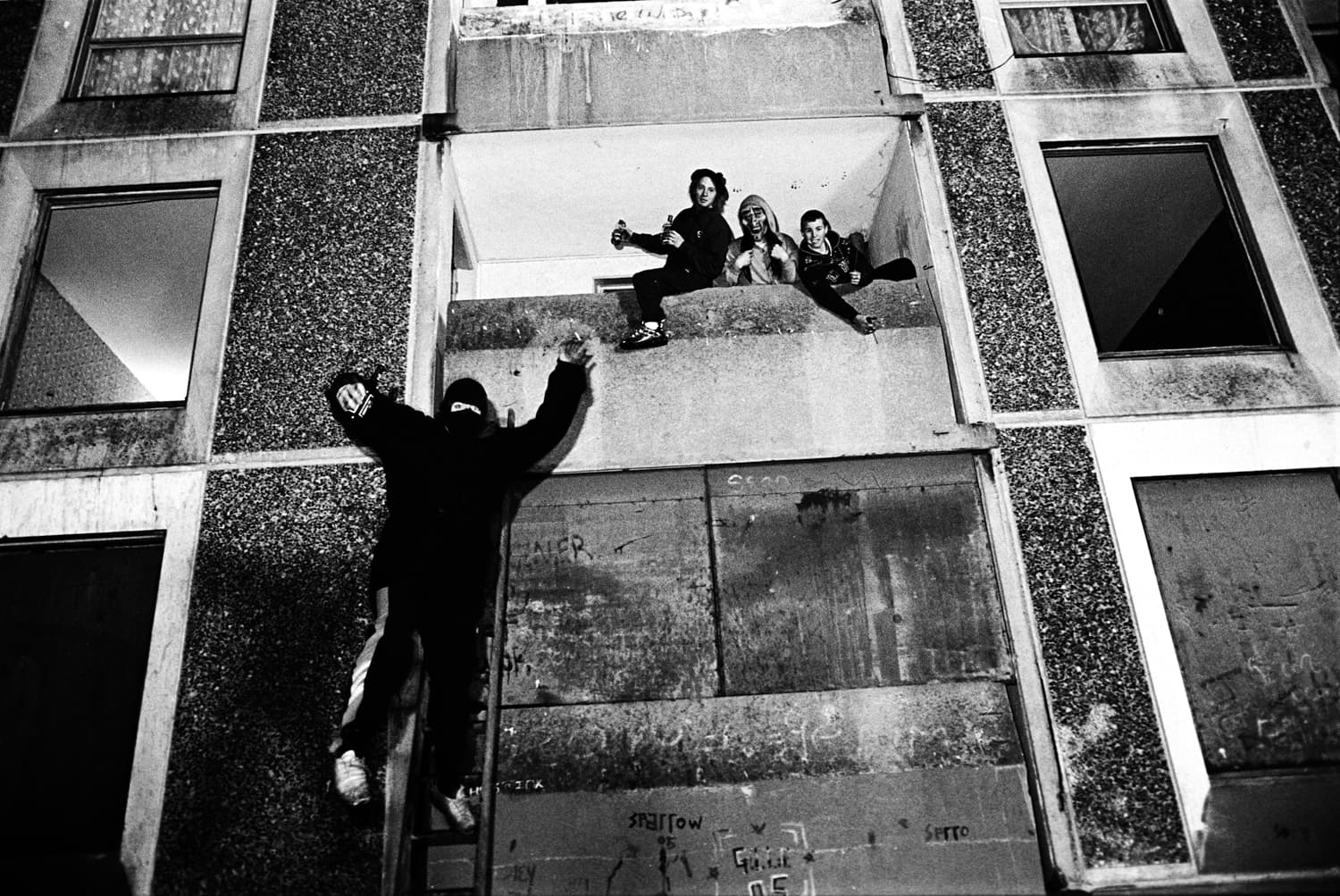 GL: When I first stumbled across your Joyrider series I felt that strange, nervous excitement that you have just after having woken up from a nightmare: what you’ve seen in your dream is unreal, yet you seem to have an intimate knowledge of it. Joyrider is like any great story, it takes you some place deeply familiar where you can’t recognize anything and feel lost and scared.

RMD: This image was taken in Ballymun, on Dublin’s Northside, on the first day I ever worked in the community. It was Halloween night and I was beginning a project I was calling ‘Days of Being Wild’ trying to capture a sense of Irishness as it was being consumed by the economic boom known as the Celtic Tiger. Ireland was socially undergoing and a kind of homogenous, commerce-driven new dawn. I felt something real, something wild and untamed about our national character was on the verge of disappearing forever and wanted to begin capturing that. Like all things concerned with nostalgia we only recognise them when they are gone or disappearing.

I went to Ballymun that particular night around 8 pm. It was one of the wildest places in Dublin and I knew Halloween would be an interesting experience to photograph there. After a couple of boring hours a 15-year-old named ‘Gillie’ approached me shooting a bonfire and asked “if I wanted to see the real crazy shit”. That moment was the beginning of the Joyrider project.

GL: You have literally ‘caught’ your subject flying. How did that happen to you? What equipment did you use?

RMD: As a matter of fact, technically these are some of the worst images that I have ever produced. The film wind-on jammed that night and tore a whole roll of film with one kid driving a car being engulfed in a ball of flame. A tragedy!

I was shooting with a black 1970s Canon FTb on a 28mm lens with a huge old Metz flash attached to the camera. I got the camera from my father when I became interested in photography. I still use it whenever possible. Probably, because I could never afford a Leica and also for the unique look I get from the old FD lenses I own.

GL: How did you capture this image?

RMD: Most of that evening I was just running around firing off this massive flash when anything was happening. Technically, at that time I was a purist and was shooting Kodak Tri-X (probably pushed to 800 ASA). I think I was shooting at 1/60 around f/2.8 to get some sense of ambient light with the flash set to f4.

There was no way to set that camera up to get a shot properly, I think these images were always shot with a total disregard for technical perfection and mostly trying to imbue the images with the energy and chaos that was happening live. In this series there is blur and flash, heavy contrast, push processing, lots of experimenting with how to make these images more interesting, more dynamic.

GL: How much do you usually work with your images in post?

RMD: With this series, the negatives are really contrasty. I’m not sure they have been retouched. When I eventually printed them properly and had them scanned I worked a little bit on the consistency of the black and white through the series but apart from that no real retouching. This is different of course now with shooting digital work.

GL: What comes to your mind when you look at this picture?

RMD: I love its energy and how bizarre it is, these urchins overtaking a high rise. That night eight years ago started a project that is still evolving and developing today. Personally, it has very powerful memories and associations for me. Maybe this was the moment I became a photographer.